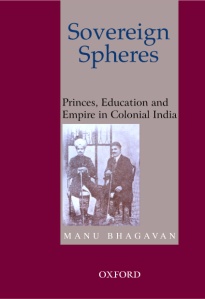 Princely states were semi-autonomous territories that made up roughly 40 per cent of South Asia under British rule. This engaging study looks at educational reform in the context of debates on modernity and anti-colonial nationalism in the two leading progressive princely states in twentieth-century India, Baroda and Mysore.

Sovereign Spheres explores the ways in which colonial authority was challenged and negotiated through both direct political action and more subtle, long-term initiatives involving social and cultural reform. In the process, the book furthers our understanding of domination and resistance and forces us to rethink our notions of the heretofore largely ignored princely states. These regions were central not only to the ideology of empire, but to nationalist visions of postcoloniality as well. In examining the role of princely state universities in the production of modern, governable subjects, the author interrogates the nature of public and private domains in the subcontinent and argues for a fundamental remodeling of colonial India.

Ground-breaking and authoritative, this book will be of importance not just to researchers of South Asian history, but to scholars and students of power dynamics, social reform movements, state formation, and to all those interested in comparative understandings of imperialism, nationalism, and modernity.